Rollaroid 600 :: a story of epic proportions

in June of 2007 my friend Rachel had this crazy idea: let’s submit an entry to Redbull’s Soap Box Race that was to take place on September 29, 2007 in Fremont (Seattle’s neighborhood deemed ‘The Center of the Universe’). it was a long shot to say the least since we compiled a team of four people who had absolutely no experience building, designing, or operating a soap box car: Rachel (computer engineer by day and cake baking goddess by night), Cox (electrical engineer and funny man), Katie (computer whiz, garment designer, and one of the most logical people i know), and myself (artist and designer with little to no understanding of logistics and functionality). we submitted the above sketch on the last possible day of the deadline.

to our (unfounded and pleasant) surprise, we were accepted as one of 40 teams (out of thousands of entries) to compete in this soap box race. at this point, we realized we had a lot of work to do that we didn’t actually know how to do in a short period of time. thus begin our arduous summer of 2007, the summer we gave birth to The Rollaroid 600. our concept? replicate (on a painfully large scale) the original Polaroid 600 Camera).

it all started with this chassis we purchased in Carnation, WA. it was the foundation of what would become the largest soap box car in the competition (after we removed the pedals, that is). there are a lot of rules when constructing a soap box car, who knew?

it was time to build the frame that would be attached to the chassis. thanks to HD Fowler Co. we received our PVC pipe supplies free of charge. PVC pipe is light (which was a huge plus considering there was a weight limit), but PVC pipes’ durability has its limits – we learned that on race day.

we spent hours after work and on weekends constructing this beast of a soap box car. we devoted two weekends (or was it three?) prior to the event to get the ‘car’ ready for race day. we couldn’t have done it without the help of countless (i’m talking 20+) friends who showed up to help and lend a hand where they could. the best way to get a real feel for the process is to view our build video, shot and edited by Rachel.

September 29th rolled around and we were barely ready for race day. we were sleep deprived. we had been working 12+ hour days on the final touches (did i mention that for every team member we needed a ‘costume’?). Rachel, who was the driver, was to be dressed as a roll of Polaroid film. as for the rest of us, we were to dress as iconic Seattle Landmarks – because during our ‘skit’ (also required of every participating team) – we were going to reveal an over sized Polaroid picture (drawn and painted by Yours Truly), as if we’d ‘taken’ a picture of Seattle before pushing our car down the ramp towards the finish line. Katie was to be dressed as the Space Needle, Cox was to be dressed as Mt. Rainier, and I was to be dressed as the Fremont Troll. if you don’t believe me, see for yourself.

to fund our project we sold t-shirts that i designed and to promote the cause we launched a website i designed which Rachel built (above is just a preview since the site is no longer active). we were on our way. the final day had arrived and we were as ready as one unprepared team could be…

there was one tiny catch. we rented a u-haul truck to transport our beast to the racing grounds (only a few miles away). our masterpiece wouldn’t fit into the truck. it was too tall. i have also failed to mention that, thanks to our electrical engineer, Cox, we had a fully functioning FLASH on our ‘camera,’ that not only rotated up and down like a real Polaroid camera, but also made the sound and flash of a real Polaroid camera. our ill prepared and inexperienced team turned out to be one h*ll of a force to be reckoned with. that said, our solution for our over sized vehicle? we borrowed the very large diesel pick up truck belonging to Rachel’s (very kind) neighbor.

let me remind you that we live in Seattle. it was raining (duh), so we haphazardly draped a tarp over our craft after loading it into the back of the truck and i precariously balanced on the bed of the pick up truck in an effort to stabilize our camera as we wound around the many curves and pot holed streets of Seattle. but we made it. in once piece, just barely.

we unloaded our mammoth vehicle and set about getting it to the weigh station. i don’t recall exactly what the maximum weight per vehicle was supposed to be, but needless to say we were well over that weight (when the flash was upright, our car was approximately 9 feet high – we realized, once looking around at the other 39 participants, their soap box cars were low to the ground, narrow, and aerodynamic – it looked like we’d rolled a large loaf of bread onto the field and we received many laughs from our competitors). fortunately, by this point, we’d made friends with Dave (the Redbull Soap Box Rep) and he waved us on through – ignoring the fact that our camera had tipped the scales.

after a few photo shoots and a lot of pacing and waiting around, it was finally our turn to put our machine to the test. i mentioned earlier that PVC pipes are not quite as strong as we had once believed. we learned this when a drunk elderly man stumbled towards our car asking if he could take a look at it. we stupidly obliged and low and behold, he put his full weight on our vehicle (just ten minutes before we were expected to pre-load). we heard a snap and watched in horror as a portion of our car buckled from the pressure. as luck would have it, a good friend and mechanical guru named Blake was present and came to our rescue: securing the cracked PVC pipe with a large pile of straws and a generous amount of duct tape, it was a splint of sorts – slightly unconventional, but entirely functional. as if we hadn’t been through enough strife for one day of soap box racing, it was now time to perform our skit (set to Outkast’s ‘Hey Ya!‘), launch our vehicle, and cross our fingers. at this point, let me also mention that there were some precarious obstacles that our poor driver, Rachel, had to face on her way down Fremont Avenue:

(90 degree bank turn/berm)
1. The Starting Ramp – this was what Katie, Cox, and I pushed the car down to begin the journey. it was steep, i’m talking a good 40 degrees steep
2. The Berm – immediately following The Ramp, it was a raised platform/wall that also happened to be a 90 degree turn (we’d already witnessed 10+ cars flip on their sides and none of them were nearly as top heavy as ours)

3. Hay Bales – the course was fairly straight but there were some hay bales, forcing the cars to swerve around. given our car was a good SIX FEET WIDE and the roadway was only just slightly wider than that, this presented a huge challenge

i cannot possibly describe this experience with any justice, you have to see it for yourself.

as if i haven’t said enough already, i have a very happy ending to this tale: not only did we not flip or crash (a miracle in and of itself), we ended up winning the PEOPLES CHOICE AWARD (aka an over sized wrench and the admiration of 30,000 some odd spectators who witnessed the event). 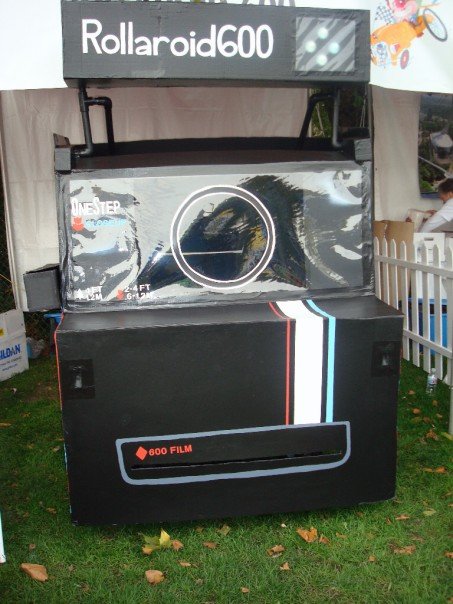 (down the hill she blows) 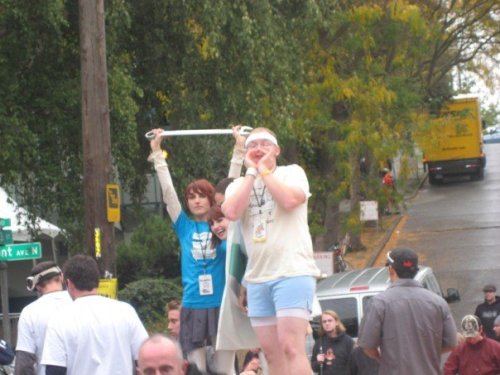 in closing, it must be mentioned that we have since given the Rollaroid 600 away (we simply did not have ample garage space to store our beast). it now proudly appears annually in the Fremont Pub Crawl, to be admired by all for years to come (or until the PVC pipes crack).