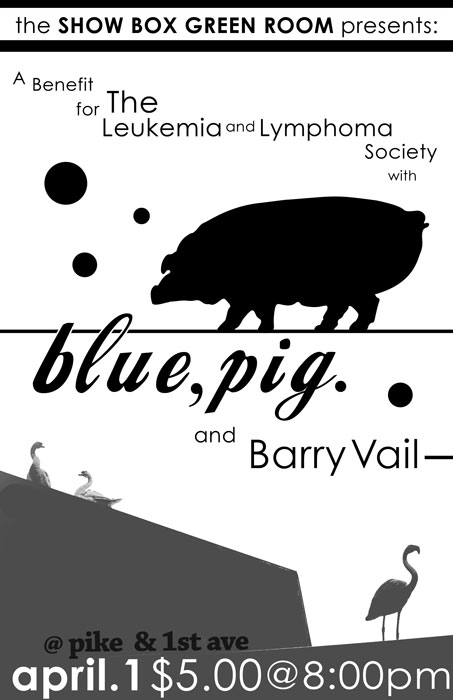 my best friend, Katie, started her band ‘Blue, Pig.‘ a couple of years ago. i designed this poster for their very first show. the venue was actually pretty cool, the turn out was more than decent, and i couldn’t have been more proud to see her, finally, singing on stage. she has an amazing voice.

we became best friends ten years ago in high school. i remember whenever i would drive anywhere i would always play music in my car that i knew she would sing along to – for the selfish reason that i just wanted to hear her voice. you may consider me bias, but when you hear her sing you’ll understand just why i would do such a thing. she’s beyond incredible and if she ever joined American Idol (vomit), i’d like to think she’d really blow the other contestants out of the water. will she ever join American Idol? no. she has no interest in selling out. she’d much rather go about it the natural way – being broke and devoted and relying on word of mouth to bring her ‘success.’

i respect her decision to do so because American Idol, really? don’t get me wrong, i love to watch the auditions (for entertainment purposes), but beyond that i have no interest in watching somewhat capable singers become super duper stars over night. i’ll admit it: there are some amazing voices that appear on American Idol, but.. but.. it’s just a form of celebrity i have a hard time understanding or supporting. but, sigh, to each their own.

p.s. if you are wondering why the band is called ‘Blue, Pig.’ then you should watch this movie.