happy halloween ! ok. i’m a few days late. i had an amazing costume, but have no pictures. i was She-Ra (Princess of Power). for those of you unfamiliar with one of the most amazing super heroes from the eighties, see this. it’s a long story as to why i don’t have pictures and i’d really rather not get into it, but take my word: the costume rocked. it was one of my best to date. and for those of you that really know me, that’s a bold statement.

i take halloween very seriously. i don’t think you understand. it is my favorite, and i mean favorite, holiday of the year. for an entire day (or usually weekend), you get to dress up as someone completely different and march around proudly in what is likely some form of your alter ego. like all things, bad comes with good. i believe in the homemade costume. the costume you make almost entirely from scratch. the costume you spend hours sewing, stitching, measuring, fitting, painting, spray painting, and safety pinning. in my humble opinion, halloween is not about looking absolutely perfect, it’s about the effort and the concept. now, i understand that She-Ra is a bit scantily clad – but i had on some nude tights and my hand sewn dress was not nearly as short as hers, and if you’ve met me – you’ll know full well that i am not the buxom blond babe portrayed above – and therefore will not be falling out of my dress. i, personally, have never had any interest in wearing as little as possible on halloween; unfortunately, i do believe that i am in the minority [of females] when i say this.

so this is the ‘bad’ i was referring to and i will try and restrain myself from venting on the matter too much, but honestly? i can’t help it. i get so frustrated when i see silly bumble bees, witches, naughty nurses, or cats wandering around on halloween. you know the girls that i am talking about and i am sorry to offend those of you who do fall into this category because i am sure you know who you are (ouch, sorry). it’s these girls who decide that halloween gives them a reason to wear as little as possible, allowing their cleavage to spill out of their costumes and their skirts to be so short that you are left to wonder why they are even wearing skirts in the first place. they likely marched into some halloween store, picked out a costume a size too small, and decided it was perfect. it is likely that these are girls just looking to attract attention while marching around – and it works. all of my male friends will hate me for writing any of this lest it deter you females out there to leave some things to the imagination come the 31st of October, but so be it. these people have put zero thought into their costumes and though they might turn heads – they are turning them for the wrong reason(s). i rest my case and will hereby dismount my soapbox.

in other news, unrelated to cleavage, i got a job ! i was convinced i would arrive in San Francisco and become a waitress – which would have been fine since i was really only looking for a job that’ll pay the bills – but i got something so much better and i can’t even begin to tell you how excited i am to be working at my all time favorite art store ever. imagine a land where all the walls are painted different colors, every sign is drawn by hand, things like glitter and paint by numbers are celebrated, and new sample supplies may be ordered merely because they are shiny and that is the only justification needed to order them :: that’s where i work. it’s like a rainbow exploded in an art store and my fellow employees and employers are colorful, vibrant, kind, creative artists who understand my love of unicorns and why sometimes, at four in the morning, it is absolutely necessary to not only rearrange your furniture, but also slap scraps of fabric and paper on anything you can find because you have to make a collage.

now, about those giants. i’m not talking about really tall people or a certain sports team from New York. i am talking about the Giants, the San Francisco Giants :: the baseball team that just won the World Series. yeah, those giants..

i can’t say i am the world’s biggest baseball fan. i will admit that i only cared about baseball when i was younger – when i was on a softball team and the Seattle Mariner’s were actually a decent team (this is Ken Griffey Jr. era). so, it’s been about sixteen years since i gave much, if any, attention to the sport. however, having just become a resident of San Francisco – it was essentially unavoidable (if not impossible) to not show at least an ounce of interest in this team and their domination of the sport. it was even harder to ignore them because they were the underdogs and who doesn’t love to root for the underdog ? so i actually went to a couple of sports bars and watched a couple of the playoff games, drifting in and out of my attention span for what was happening on the t.v., but that’s not the point – i went, i saw, and i even cheered. i have uttered, “Go Giants !” probably about a dozen times – most of which were to homeless people who were asking for money and upon denying them (there are only so many dollar bills you can give away in a day) their reply, for some reason, was usually, “HEY GO GIANTS!”

sadly, i was napping [accidentally on my floor] when the last game was played and won. this is just how committed i am to the sport, clearly. at around 11:30pm, one of my roommates knocked on my door. i bolted upright (you know, the whole ‘i-wasn’t-sleeping-on-my-floor-when-you-knocked-i-was-being-super-productive’ reaction one naturally has when they feel guilty for sleeping during the hours they feel they should be awake) and answered – they informed me of the Giants’ victory and invited me out to the corner of Grant and Green (the epicenter of celebration) for a celebratory drink. naturally, and in an effort to be a Good San Franciscan, I agreed and ended up sitting outside some random bar only to observe absolute chaos take place on the streets. honking horns, fire trucks, drunks, yelling, you name it. and there was even a massive parade this morning (which, according to my co-workers, completely stopped all traffic) that took place on one of the main drags in the city. i am also convinced that half of San Francisco, thanks to this victory parade, called in ‘sick’ to work today. so, yeah, GO GIANTS ! 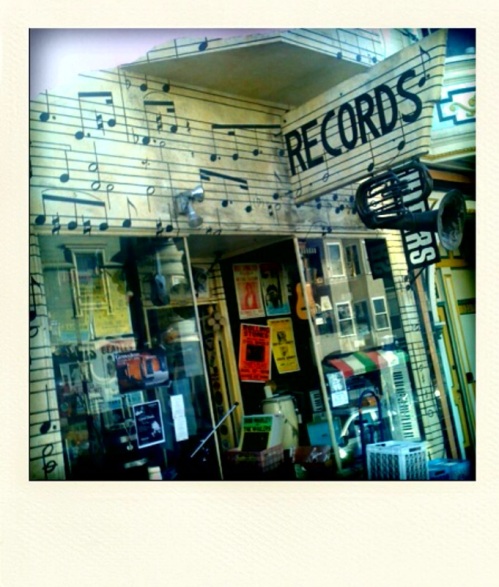 as for vinyl ? i found this amazing nameless music and record store – i adore the exterior paint job – and the record collection was ridiculous. the above photo is a fraction of their collection. the records are stacked from floor to ceiling in the basement and on the ground floor you are forced to walk through narrow gaps between record players, amps, stereos, and all things music – though, it does appear as if most of this stuff was stolen-  but whatever, i just had to share :: it was too amazing not to.