i just realized today that it has been one month and a day since my last post. poor neglected blog. i pity thee.

i began writing a post about two, nay three, weeks ago and promptly stopped writing it mid-sentence. it was such a debbie downer of a post. it had to do with feelings of insignificance, angst, and being smacked by a drunk old man (true story). in hindsight, i have to say that i applaud my decision to stop writing said post mid-sentence.

i bought a planner in january, right after my birthday. i had high hopes of using said planner to map my days out and attempt to organize my life. ironically, said planner was misplaced only a week later. the losing of the planner has had quite an impact on my life, i think. i have searched high and low for this d*mn thing and it is nowhere to be found, believe you me. i bought this particular planner at my place of work and of course when i decided, two weeks later, that i would just sack up and buy another one – we’d sold out – without any plans to order any more because after the first couple of months of the year have passed, people have the planners they need and don’t go out looking for new ones. i’ve made a somewhat concerted effort to replace the planner, but have failed in my attempts. no one is carrying them. so apparently, if you buy a planner at the start of a new year – you’d best keep it in a safe place. and that’s another thing about me, when i acquire something important that i may not use daily, but would really like to keep around on a weekly basis – i tend to keep them in ‘safe places.’ my ‘safe places,’ however, always become mysteries and once again i face the fact that i have lost something that i really needed. can i get a round of applause for that ?

so, confession time. what the h*ll have i been doing ? what has been occupying my time ?

first of all. i got sick. wait, i was sick. ok, i have to explain this a little bit and i bet you are, by now, chomping at the bit to hear what i have to say :: i started coughing on November 9th (i recall this date only because of a text message i happened to dig up that declared to someone that i had just woken up sick and was running to a drug store for dayquil/nyquil/the works). ever since i was a kid, i have a knack for having a rather obnoxious cough. even when i was battling a minor cold, my cough would sound as if a lung (or two) were quite likely to fall out of my chest and mouth. i coughed through november. and december. and january. there was a space of two or three weeks in the middle that it seemed to subside slightly, leaving me to believe i was facing the light at the of the ‘cough tunnel,’ if you will. but then, three-ish weeks ago, the cough became worse and worse. it had gotten to the point where i just expected to be awake at night to have some coughing fits. when it finally reached the point that i was waking up every hour on the hour for a good twenty minutes to dry heave on my single mattress, i decided i should see a doctor. now, my delay at seeing a doctor in the first place stemmed from two things :: 1. i hate seeing doctors. i hate making an appointment. i hate waiting rooms. i hate having to breath in and out while they place a cold (can’t they warm those things up before they do this ?) stethoscope on my back and chest. and 2. i had no health insurance. my health insurance from my work didn’t kick in until the start of february, so i was waiting it out. and even when it kicked in, i didn’t have a health insurance card in my wallet – it was in the mail (and, actually, still is). i called around to a handful of free clinics, but either the line was permanently busy or their estimated wait time was 4+ hours. to make a long story short, i finally saw a doctor a week ago, was diagnosed with bronchitis and sinusitis, received antibiotics, an inhaler, codeine cough syrup – and here i am, a week later, 95% cough free ! i really can’t tell you how excited that makes me.

and then i was part of a show that opened on february 4th. it was a group show – the ‘group’ being me and my three fellow employees at the art store where i work. so for the last week of january and the first week of february, i was feverishly making pieces for the show. we had just over a week’s warning to prepare, so i was ‘a little busy’ to say the least. the show was only up for a week, but it was a good time. the opening was fabulous :: we had wine, cheese, christmas lights, music, and lots of foot traffic. i made a sale (or two) and that was that. care to see some new pieces from 2011 ? (bad photographs, apologies) :: 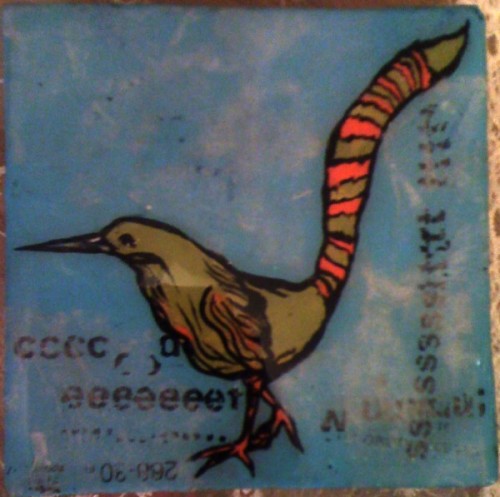 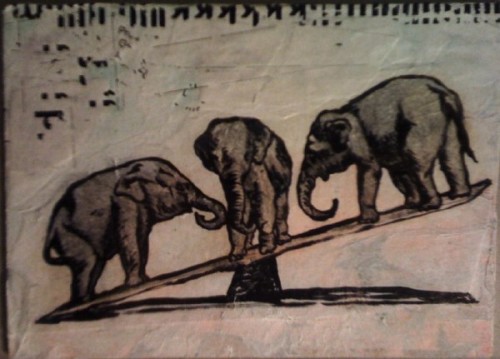 in the last week, i have hereby confirmed that i am going to be an art teacher. ok, i’ll cut the crap. i’m going to be teaching one girl some art classes once a week. i’ve had some people interested in my holding a proper ‘class’ out of my apartment – which i may still do – but for now, i have just the one client and i am incredibly excited ! she’s thirteen, home-schooled, and has had not, to my knowledge, had any formal training in art whatsoever. aware of how cliche this sounds, the chance at getting to teach a young girl about art is like staring at a big blank canvas – inspiring, exciting, and terrifying. i can’t wait. the first ‘class’ is this monday and i will let you know how it goes !

and two weeks ago, i was given permission (from my fantastically awesome roommates) that i could move my studio from my bedroom to our living room (a room we rarely use) without any further cost. this means i can now sleep in my bed and have an entire bedroom to myself – it’s still only about 10’x10′ – but when you remove two desks, a file cabinet, and copious amounts of art supplies – this former studio/bedroom, in comparison, feels not unlike a mansion. our living room is quite spacious – almost twice the size of my bedroom – and i am in heaven here. i can walk more than two feet from my desk and not run into my mattress/a pile of clothes/a turtle tank/a closet/what have you. truly liberating.

and last, but certainly not least, i was assigned probably one of my favorite jobs to date. i hate referring to all freelance work (particularly this one) as a ‘job’ because the word job implies a sort of chore – and this, my friends, was nothing of the sort. i will try and keep a long story short, but knowing my propensity for a-rambling – it is unlikely that this will be a short paragraph. about a week ago, the phone at my work rang. usually the manager or assistant manager answers the phone, but we were slammed and i happened to be the staff member closed to it ( as fate would have it, if you will.. since i do believe that all things happen for a reason). so, i answered, as usual, ‘Artist & Craftsman, this is Jessi.’ the voice on the other side belonged to a man who was looking for an illustrator. he had some specifics for a painting in mind and called our art store in an attempt to find someone, anyone, willing to complete this project. i replied, to his delight, that i went to school for illustration and would be interested in said project. so, we scheduled a time to meet to discuss the details. as usual, i had some hesitations. things like this usually start out so simple and well-meaning and end up turning into a mess – a clash of left and right brains – and leave me feeling as if i have signed some contract with the ‘freelance devil’ – meaning :: i’m getting paid to make something i don’t really want to make, but i’ll make it regardless because i could use the money (there’s a reason my professors at college considered the Freelance Illustration world a world of being an art-whore/art-prostitute – completing jobs you didn’t want to complete in the first place, but agreeing to do them anyway because there will, inevitably, be a check at the end of it all).

when i met up with him, just two days later, i knew right off the bat that this was going to be one of those ‘exceptions’ to the art-whore Freelance Illustration jobs. he was kind, funny, and open-minded. he gave me the details and told me to grab the bull by the horns and run with it. the project, in short, is an anniversary painting. one year ago (yesterday), he met a woman on a plane bound for New York from Denver. they spent the entire flight talking to each other and now, a year later, have fallen fast in love. he gave me the flight number, the airport codes, and every other imaginable detail related to this first encounter on this flight that brought them together. he wanted a painting. and a collage. he wanted to merge all of these significant details of their first encounter into one painting.

first of all, i have to admit, i melted at his request. what an amazing request – right ? being a girl (and a romantic at heart), i couldn’t help but want to jump into this project face first. so, for the past week, i have been working my tail off to complete this project because he needed the final product to be overnighted to New York City on the 24th so it would arrive on the 25th – the day that both he and she would be in NYC. today is the 24th (just, you know, for your information), so I completed this mixed media painting this morning. i spent a good deal of time with both UPS and FedEx to discuss shipping costs and, subsequently, spent close to an hour on the floor in FedEx ‘making’ a box that would fit the dimensions of the painting, packing the painting, and sending it off. i even called the hotel in NYC to request that they call me tomorrow to confirm the delivery of the painting.

and of course, as usual, i was so eager to finish this piece, pack it up, and ship it – i forgot to take a picture of it. so, when it has been received in New York City – a photograph will follow shortly thereafter, but i love the piece and i hope it’ll make their one year anniversary that much more special..

over and out. my eyes are hurting from all the computer shenanigans.

[poster :: digital design][mixed media on all of the above][iPhone photograph of my new studio]