i have a little venting to do about the gym.

i rode horses for sixteen years. going to the barn has always been my gym. fresh air and the smell of leather. not to mention a twelve hundred pound animal between your legs. if you are like me, this is your idea of heaven.

when i lived in new york city, i joined a gym and would do something that would make me sweat about five times a week. i hated it (well, exercise itself feels great, but it’s the process that i hate). i hate gyms. i hate running in circles. i hate treadmills and elliptical trainers even more – they are just glorified hamster wheels in my opinion. how unsatisfying is it to run for twenty minutes solid and arrive nowhere ? there are mirrors everywhere that only remind you of why you are there in the first place. but you also get a glimpse and (usually a strong) smell of all the other people there who are sweating it out. some may be regulars, some may be obsessive, and some may just feel really guilty about the cheeseburger they ate for lunch that day. and is it just me ? or do they seem to play The Food Network all the time at the gym ? the more i think about it, the more i think that i hate the gym just as much as i hate the laundromat.

i know plenty of people who love going to the gym. more power to them. i admire them one hundred percent, seriously. perhaps if i lifted weights and reveled in my own self reflection, i’d like the gym, too. i’ll never forget this tiny gym i joined in new york city on 14th street. i went there about five times a week to stretch, do crunches, and run one or two miles. my two strongest memories are as follows ::

1. the old ladies gathered in the ladies locker room about twice a week. they would sit together, naked, chatting about their lives, their days. they were all well over sixty years old. i never stared at them, but when you are amongst a flock of older ladies in a tiny locker room whilst you are changing, you’ll catch a glimpse of the naked bodies surrounding you. their bodies were old, worn, and sagged. but beautiful. so beautiful. what made them so beautiful was not the bodies themselves, but their complete comfort with themselves. sure, their breasts hung at strange and low angles, they had more fat on their bodies than the average girl would ever consider appropriate, but they just sat around talking to each other as if they were fully clothed, with nothing to hide, no secrets. so, i applaud them. and their self comfort. and lack of low self esteem. those ladies completely rule as far as i’m concerned.

2. a gentleman who must have been around fifty years old – give or take. he always came to the gym dressed in short shorts – black spandex. hugging and “exaggerating” every part of his male form from the waist down. he wore a tight white “wife beater” tank and on his head an american flag bandana. he’d flex his muscles into the mirrors and admire himself. he was never the sort to look at the girls in the gym (which is refreshing, because having those over-confident males stare at you while you are breaking a sweat on the treadmill is entirely disgusting). he would arrive, do his thing, and leave. and i always considered him awesome because of it.

oh, the gym. if you go to a gym and like it, keep going. more power to you. if you are like me, you will cancel your gym membership and begin jogging on the streets for free. the perk being that it is free, the non-perk being that i have a bad back which hates running on pavement and i have apparently even worse ankles that hate the unavoidable hills that this city forces you to climb or descend when going for a run. but i’ve become addicted to running. i haven’t run for forty eight hours because of a terrible blister on my right heel and a cold i just came down with this morning. i want to run so badly right now, but i know that doing so will only cause my ankles further harm. and as for my head cold ? it’s left me so exhausted, i shouldn’t be exerting any energy right now unless it is towards health and a good night of sleep.

running on the streets of san francisco has been so rewarding. i’ve seen more of the city in the past two weeks than i have in the year that i have lived here. and i happen to run at strange times. i will fall to sleep early and rise at 4:30am feeling restless. and run. run down the middle of streets that are usually crowded with cars and people during the “normal” hours of the day, but at 4:30am, they are empty and feel like nothing short of a meditation session. so i wear my pink sneakers. and i feel like Mr. Gump. i just can’t wait to run. maybe i’m running away from something i’m feeling. or maybe i’m running towards something. it really doesn’t matter because all i know is that it feels damn good either way.

as for “a.” there is a small deli downstairs from my apartment run by a very sweet family. the mother and father are always there and i almost always see their son, who i’ll call “A,” because he’s there doing his homework after school (i usually only get there after work). in the last week, he’s started selling his paintings. he’s about nine years old and does theses fantastic drawings which he prices anywhere from 5 cents to 50 cents. i am now the proud owner of four of them :: 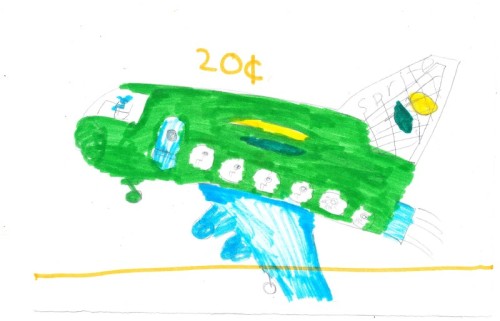 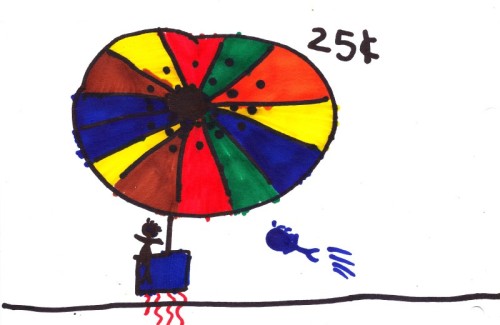 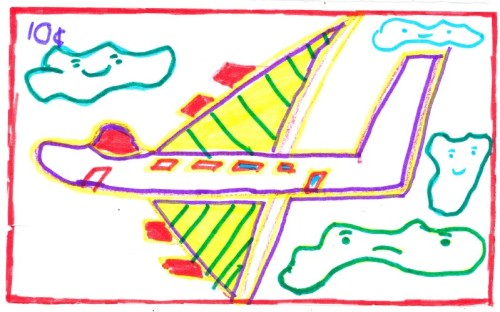 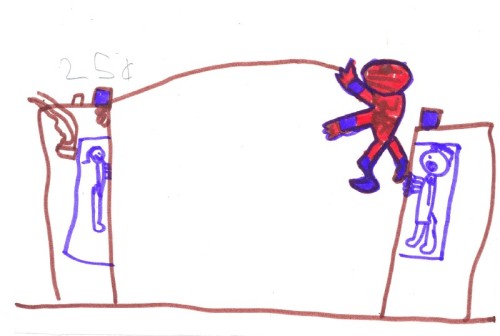 i love life. it has a funny way of working itself out.

these drawings make my heart smile and sing so loudly that i’d be surprised if you couldn’t hear it by now.