pink and purple were my least favorite colors growing up. in fact, i actually recall saying how much i hated those two colors as a kid. the plain and simple reason for hating those colors was because of their “girlie” status. anything “girlie,” from trying on lipstick to admitting you had a crush on a boy, was completely out of the question for me. i would play with the boys during recess, proud to emerge from the playground covered in dirt, with messy hair, and sometimes a fat lip (which i learned to hide under my hand so my teachers and mom would never figure out how much of a trouble maker i really wanted to be). after art class, my next favorite class was always gym. a time when girls will be girls and boys will be boys and when tomboys like myself get to show off just how fast they are during their favorite game of all, Capture the Flag.

in the third grade, there was a brief period of time, lasting around two weeks, when i decided that black was my new favorite color (it had previously been blue, naturally). everything from my wardrobe to my bed sheets turned black almost overnight. little known fact :: when i was in third grade, my family decided to move back to Europe, to the UK. my sister and i were pulled out of our elementary school mid spring semester (if memory serves). i even have a memory of a farewell party being thrown, but i think the farewell party i am remembering was for my very first crush on a boy named Pat, who moved to California the same year we were planning on moving to England. my crush on Pat was also happening while i was busy being anti-girl, so extreme secrecy was of utmost importance.

i’ll never forget this one moment my sister and i shared in a hallway at school. she was in the fifth grade and i was in the third grade. we were both at our lockers, with a block of fourth grade lockers between us. i don’t remember if it was the middle of the day or the end of the day, but the hallway was close to empty. for whatever reason, she and i had been bickering about something (just normal sister bickers) and this somehow turned into her yelling down the hallway at me that i had a crush on Pat _ _ _ _ _ _ (i will not disclose his last name so he may remain anonymous, although he is a friend of mine on facebook and the only Pat in the class, so he may figure this out if he ever reads this, gasp!). i don’t know if she actually yelled this. i was going to use the word scream to describe the volume of her voice, but i am certain my child memory is blowing this whole thing out of proportion, just as most child memories do. regardless, i remember feeling intense embarrassment, humiliation, and anger. how could she disclose my most protected secret to (what felt like) the world (a next to empty elementary school hallway) ? if anyone heard this, my reputation on the Capture the Flag field would be blown and people would expect me to start wearing pink and purple headbands to school (headbands of the elastic spandex variety, thank you very much early nineties) and the girls would think i was just like them, a girl – ew. little did my sister know that i would have the guts to throw a stone at her glass house and scream (yes, i do remember screaming this) back at her that she had a crush on probably the most popular boy in the fifth grade, Beau _ _ _ _ _ _. and i do believe this was also her most highly protected secret at the time. man, i miss elementary school. it was the best time of childhood life because you’re not yet old enough to be entirely too self conscious, but just old enough to be taking things around you more seriously (even if those things are just crushes on boys and wondering which girl got her period first).

so, back to the moving-to-England story. my family packed up shop entirely. we had our dogs (if i remember correctly :: two great danes, a lab, and a golden retriever) shipped over and placed in quarantine, we packed up our entire house and placed our boxes on a truck that would cross america and then be transferred to a boat on the east coast that would cross the atlantic. we put said house up for sale and my sister and i were going to enroll in a school that we had already visited and we were all going to move into a beautiful house in England that my parents had already purchased. it was at this point, when moving into our new space, that i requested black bed sheets, pillow cases, and a duvet cover. i was granted my wish and remember feeling somewhat regretful of my decision when i lay in bed at night. it was fine during the day, but by nightfall, the black hole that was my bed felt so dark and gloomy that it made it difficult to sleep. i never complained though because i figured, if you make your own bed, you’d best lie in it. i never thought that expression would ever turn literal on me, but so be it. after about two weeks, i remember stirring in the middle of the night. it must have been around two or three in the morning. i still hadn’t adjusted to the jet lag and waking up in the middle of the night was not entirely unexpected. i saw that the lights in the kitchen, which were usually off at night, were on. i heard low voices speaking to each other so i got up to see who was awake. my mother, father, and sister were all huddled in the kitchen together discussing our relocation. to the best of my memory, i recall my mother saying that she felt she was adapting well to the change and looking forward to living in England again. that is the country in which she was born and raised in, so her feeling “at home” on her home turf was completely logical. i know that my sister was having a hard time adapting, as was my father, but both for different reasons. i recall being somewhat neutral about the whole situation. i was happy there (as long as i got some new covers for my bed), but i was happy in Washington as well. i was two years younger than my sister, so my roots in friendship and school and socializing and sports had not yet developed like my older sister’s had. in hindsight, i know it was easier for me to relocate because i was too young to probably understand the significance of any of the friends or choices i had made prior to moving, unlike my sister, who was in the thick of it. in the thick of all things growing up, adolescence, and coming of age. 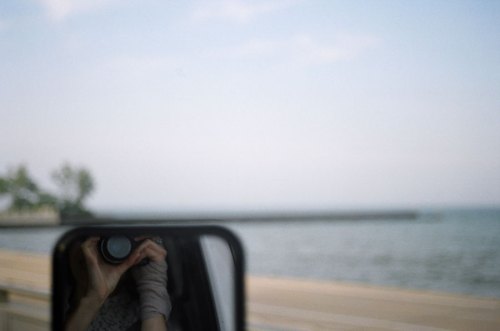 [self portrait in u-haul somewhere between the east and west coasts, june 2007]

that night an executive decision was made for the family. we were going to stop that truck on the freeway in the middle of america and turn it around. we were going to get our dogs out of quarantine and back on a one way flight to seattle. were going to put our clothes and black bed sheets back in our over-sized suitcases and book tickets back to washington. we would take our previous house off the market and put our brand new house up for sale. we’d call our new school to inform them, regretfully, of our decision not to attend and call our old school, with fingers crossed, to ask if we would be welcome back into their classrooms.

so, for two weeks, i still feel as if i lived in England. i still wonder to this day what would have come of me and my family if we’d stayed. it’s hard not to ponder such questions when it was so close to becoming a reality. would i have developed an english accent? would i have been divorced by now? would my sister have had kids by now? would my parents still be together? would i have fallen in love with horses like i did in seattle just two years after this “move”? would i have gone to art school in new york city? would i be living in san francisco now? i guess the only answer to those questions is :: “maybe.”

all i know is that when we moved back from England into our original house in washington, my new favorite color was brown.

these days, my favorite colors tend to be pink and all shades/versions of turquoise or teal. but, that said, since my move back to the states, i still believe that the only color that matches and will never clash with another color is the color brown. and as for black? i use black only for line drawings or graphic illustrations. when it comes to oil painting, you will never see a tube of black paint in my tool box. black will only create a black hole in your painting, much like the black hole it created in my bedroom when i lived in England. and i think we’ve all got enough to worry about without painting black holes into our lives.