the title of this post means the following (roughly translated from Latin) ::

seize the day, trusting as little as possible in the future.

future tattoo. why ? why get such a message permanently inked onto my skin ? and why now ?

well, there are many reasons. some may think it is a bit cryptic or pessimistic. however, when i first read this i felt hopeful if not on the verge of optimistic. i consider myself to be a realist at heart with a dash of optimism. i strongly believe that everything happens for a reason.

i believe in seizing the day. who’s to say i won’t be struck and killed by a bus tomorrow morning ? i’m really not trying to be a debbie downer here. i promise. i do not have a death wish and i am not suicidal, but i do believe in living every day as if it were your last. as hard we try to control our future(s) on this earth, there really is no way to control them. sure, we might choose a certain career, pick a certain major at school, live in a certain city, yadda yadda, but ultimately our fate is not completely in our control.

this leads me to why i have been so absent from this blog (i really hate the term ‘blog’ :: apologies to fellow ‘bloggers’) er site for nearly an entire month (*sigh*). after what could have been a serious health scare, i had a major self re-evaluation of my own life. no, i was not about to die, but… the scare was certainly significant enough to make me re-think the way i have been living my life. from the amount of sleep i get (or, i suppose, lack) to what i consume on a regular basis (from alcohol to cigarettes to food, etc.). after my ‘scare’ (ok, ok, i’ll keep the mystery out of this :: on the 10th of August i suffered two grand mal seizures thanks to a medication i was taking), it took me about two weeks to recover from it. i’ve suffered several concussions (thank you, horse back riding) in my life and after those seizures – it felt like i’d had a serious concussion. my short term memory was more or less shot (and it still is to some degree), i had a terrible headache, and i just felt completely off. unless you’ve experienced this, you will not entirely understand it. it’s almost like vertigo and a concussion had a love child, that’s the best way to describe it and as a result i did not ride a horse for nearly five weeks and i cannot legally drive for six months (which, by the way, kinda puts a damper on someone who relies on their car to get everywhere :: including the beautiful city of San Francisco when i move there come the first week of October).

once i’d more or less come out of my blah from the seizures, two people in my life passed away. one suddenly from a horrific accident and the other was a close member in the family. i ended up attending two funerals in the space of one week and spending seven days in Montana (where the family was and where one of the funerals took place). so, yeah, has it been a bit of a shi**y month? yah, sure, you betcha, but it can only go up from here, right?

(an illustration made a couple of years ago that more or less sums up how i am feeling these days) :: 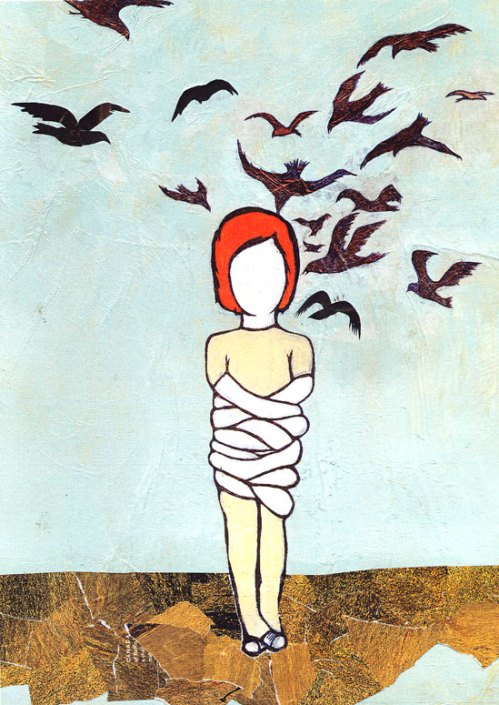 so i’ve been painting. and painting. and painting. i’ve been a horrible business woman. i’ve more or less neglected many emails and requests from potential clients as i dealt with my own health issues and then the loss of two people in my life. i move south in roughly three weeks. i am nowhere near ready, but i will keep my eyes ahead and continue to put one foot in front of the other because come h*ll or high water, by the first week of October, I will be a resident of San Francisco.

and another little piece i painted in the midst of all this :: 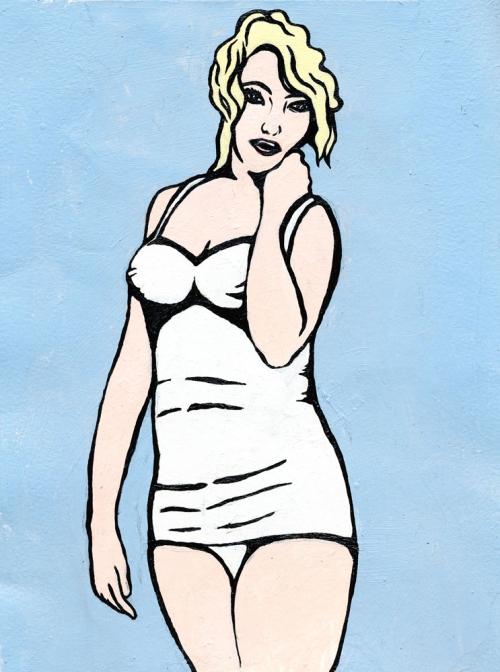 that, my friends, is all i’ve got for now. i am happy to report i am currently working on a project for a local business right now and do feel as though i am slowly finding my freelance feet again. i thank you for your patience and i’ll see you soon. lots of exciting things in the near future and quite a few paintings i will be finishing up this week that i am eager to share.

i wish you all good health, happiness, and a beautiful ending to your respective summers. i can’t believe fall is already here.