on wednesday morning i was waiting in washington square park (for the drawing class i’m teaching). per usual, there was a group of elderly asian women doing some tai chi in the corner of the park. i wouldn’t hire them for a synchronized swimming or dance team if i were you, but that’s just me. i had arrived early, so i had some time to observe their movements and i kid you not – part of their ‘program’ was a direct rip off from The Macarena. you know exactly what song i’m referring to and i can guarantee 90% of the people who read this (at least) have partaken in the very specific dance associated with the song. the kicker being that at the end of the dance sequence, you are to place your hands on your hips, half yell a “HI-YAH,” and turn ninety degrees counter clockwise. and that was exactly what these elderly asian women were doing in the park at 9:15am on a wednesday morning. sure, they were not quite as coordinated and sexy as the dancers from the music video and their arm movements resembled more of a flailing accident than an actual ‘dance,’ but believe you me – it was the macarena. i can’t help but applaud their effort(s).

so, i have recently become well acquainted with a cat name Logan. named after ‘wolverine’ from x-men. this cat is huge. i’m not even talking fat, but extraordinarily large. his paws are huge. his body is massive. he weighs well over twenty pounds without looking obese, but rather, looking too big for his britches – if you will. and he’s so sweet. one of the sweetest cats you’ll ever meet. if you are sitting down and are lucky enough to have him crawl on you, you will heave and pant for air because his mass will, quite literally, take the wind out of you. some may consider this a form of animal cruelty to allow a cat to grow so large, but he is not alone. he lives with another cat named Batman. and batman is black and svelte (and yes, they are in love with each other just as my drawing would have you believe). they are each fed the same amount of kibble each morning. Logan does not appear to be uncomfortable, unhappy, or overfed. he’s just a big guy. and he’s amazing. and the best part is probably his MEOW – which is so high pitched, any soprano singer would turn green with envy upon hearing it. 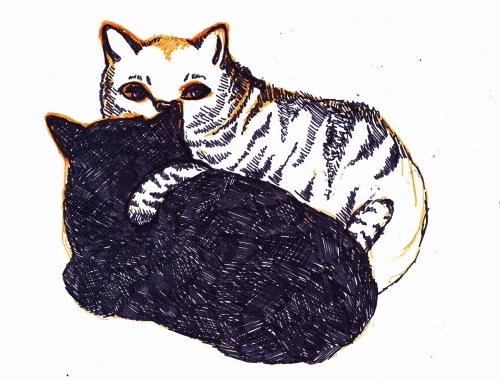 so something rather hilarious just happened. or at least i think it’s hilarious.

i was just downstairs setting out our trash and recycling for the week. now, every week, the same little lady comes to collect our cans. she’s told me her name (more than once), but i’m not even going to attempt to spell it. she’s incredibly polite and patient while my roommate and i sort through the bags to get her as many cans and bottles as we can find. so, this evening, i was doing my usual thing of setting the bins out. she was there, as usual, waiting for me. just as i’d finished setting out the recycling bin, a man walks up with a cigarette dangling from his mouth. he proceeds to start sorting through our recycling, cutting off the little lady. being the polite thing that she is, she makes a small protest, but the man continues to do his thing – picking cans and bottles out of our trash. so, i did what any sane person would do. i yelled at him. i believe my exact words were, “get the f*ck out of here ! she’s here every week, these are her cans !” to this, he looked at me rather shell shocked, put down the snapple bottle in his hand, and sauntered off with a huff. the lady then proceeded to bow and profusely thank me for my having defended her and our/her cans.

i can safely say that after this experience, i feel like this is home. i have a place here. i’m in the process of leaving my mark. and isn’t that the point of being alive ? defending that lady may seem entirely insignificant, but it is a piece of the larger puzzle that is my life. i must be doing something right.

Filed under illustration (both acrylic and oilt)